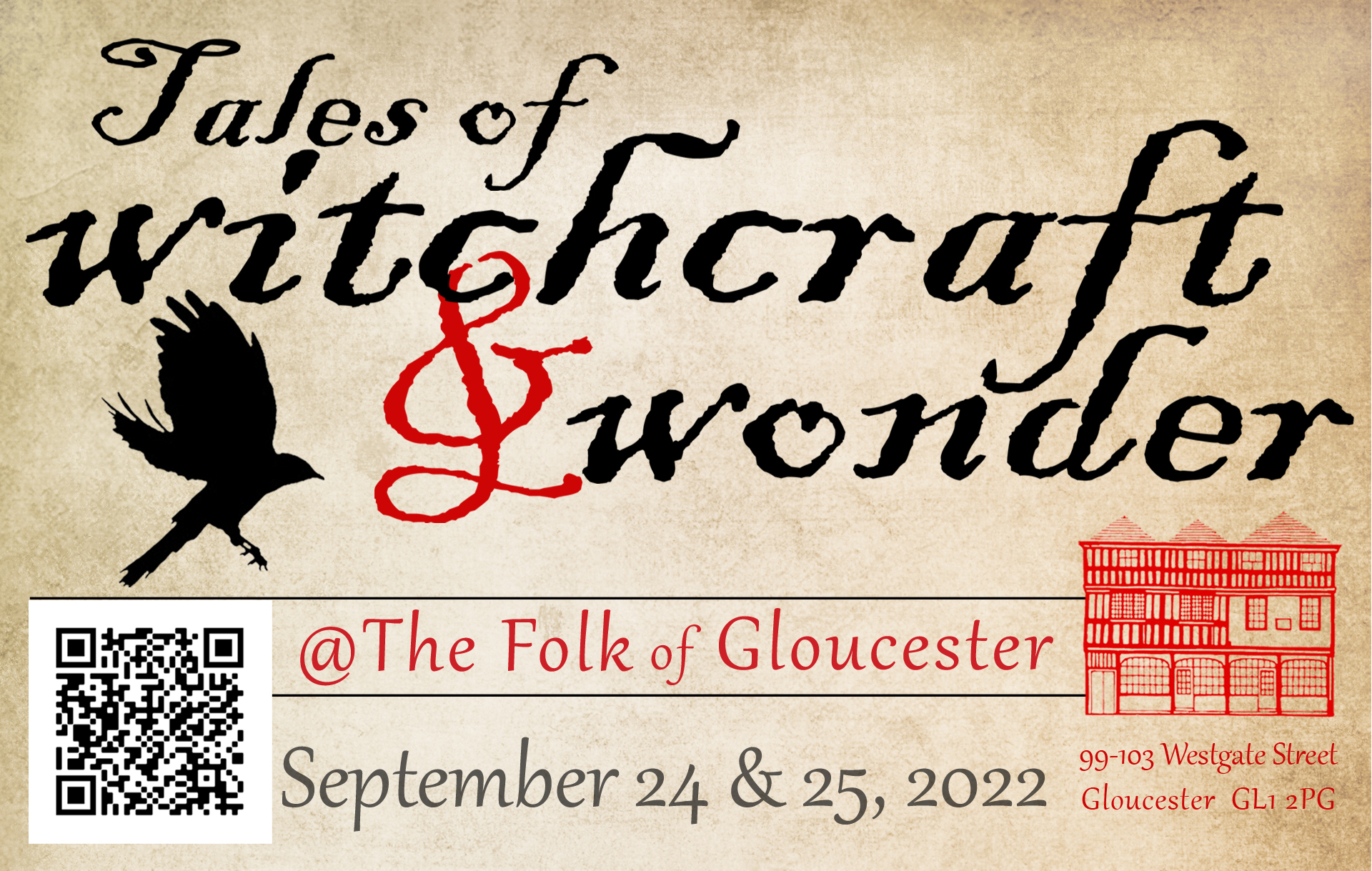 Founded by Gloucestershire-based Inkubus Sukkubus, the Tales of Witchcraft & Wonder events have celebrated the folklore and dark folk tales of Great Britain, often more specifically Gloucestershire and the West Country, since 2016.

The first event was held at Gloucester’s historic Blackfriars Priory in September of that year, and raised £2,284 for Gloucestershire Wildlife Trust. This year’s event is a two-day affair – on Saturday, September 24th & Sunday, September 25th – to be held at and to raise funds to help preserve the Tudor buildings of The Folk of Gloucester on the city’s historic Westgate Street.

Daytime events are FREE and run from 10am-5pm on Saturday, September 24th; and 12 noon-4pm on Sunday, September 25th.
Throughout the buildings will be a series of stalls to pick up witchy supplies, books, gifts and all manner of curiosities. The Secret Garden Café will be serving hot and cold drinks and light refreshments, while the courtyard bar will keep you supplied with local ales and ciders.

Entertainment on the evening of Saturday, September 24th runs from 7-11pm, and will feature live music from Inkubus Sukkubus and Sproatly Smith, with Blackthorn Ritualistic Folk Group and other little surprises along the way plus, of course, a local ale and cider bar. Tickets £15.

Inkubus Sukkubus formed in Gloucestershire in 1989, writing and performing songs about witchcraft, magick, folklore, vampirism and death rites. They have toured extensively, including dates in Mexico, mainland Europe, Russia, Australia, Scandinavia and the USA, and have released 26 studio albums, including their folkloric trilogy Tales of Witchcraft & Wonder.

Sproatly Smith are a band with an air of mystery about them, steeped as they are in Herefordshire’s folklore. The band’s music draws on traditional folk music, delving into its origins, reinventing it and spinning it out into the current day, so that when listening to it you find yourself transported, as if down one of the ancient green lanes that criss-cross the county.

Blackthorn are Herefordshire’s innovative ritualistic folk group. Their members come mostly from this mysterious borderland county, home to superior ciders, excellent hops and the spiritual presence of the folklorist, Ella Mary Leather, and the ley line investigator, Alfred Watkins. Blackthorn combines ‘dark’ elements of male and female energies to gather and celebrate the Earth Cycle through the eight points of the Wheel of the Year at sacred and historical sites.

If you are a trader, and wish to book a slot at this wonderful event, you can do so here

We use cookies on our website to give you the most relevant experience by remembering your preferences and repeat visits. By clicking “Accept All”, you consent to the use of ALL the cookies. However, you may visit "Cookie Settings" to provide a controlled consent.
Cookie SettingsAccept All
Manage consent

This website uses cookies to improve your experience while you navigate through the website. Out of these, the cookies that are categorized as necessary are stored on your browser as they are essential for the working of basic functionalities of the website. We also use third-party cookies that help us analyze and understand how you use this website. These cookies will be stored in your browser only with your consent. You also have the option to opt-out of these cookies. But opting out of some of these cookies may affect your browsing experience.
Necessary Always Enabled
Necessary cookies are absolutely essential for the website to function properly. These cookies ensure basic functionalities and security features of the website, anonymously.
Functional
Functional cookies help to perform certain functionalities like sharing the content of the website on social media platforms, collect feedbacks, and other third-party features.
Performance
Performance cookies are used to understand and analyze the key performance indexes of the website which helps in delivering a better user experience for the visitors.
Analytics
Analytical cookies are used to understand how visitors interact with the website. These cookies help provide information on metrics the number of visitors, bounce rate, traffic source, etc.
Advertisement
Advertisement cookies are used to provide visitors with relevant ads and marketing campaigns. These cookies track visitors across websites and collect information to provide customized ads.
Others
Other uncategorized cookies are those that are being analyzed and have not been classified into a category as yet.
SAVE & ACCEPT